It’s been two months since the launch of my debut poetry pamphlet Emergency Mints (Paper Swans Press, 2018) and I thought this would be a good time to introduce tnree of the poems, and share an audio recording of each.

The summer our father sailed the English Channel,
we rolled packets of Polos into smooth white paper tubes.
My sister used her felt tip pens to write EMERGENCY

MINTS down each bony spine.
You were our polar explorer,
arctic adventurer.

We charted your route, coloured
the curved waves of land, solid
blue slab of sea.

And when you came back—all
St Tropez tan and French laugh,
Cognac and St Christopher—

we listened to your stories of basking
sharks and places orcas go to die, or you lashed
to the mast in a great wild storm, sucking

mints like tiny life belts. How you were
blown weightless across the harbour,
just missing the light

ship in the fog, the three of us
clinging to your legs as if your very voice
could stop us from drowning.

This poem charts the story of my father sailing the English Channel in a small yacht, back in the 1970s. It has to be said, he wasn’t a great sailor and felt very sick at sea. A few years ago I asked him about this crossing, but sadly, now in his eighties. he remembers very little of it. It was my sister who recalled the events in the poem from childhood, bringing into question concepts of ‘truth’ and memory.

claws of sweet bananas. All laid out,
they become these islands, a map
of the Caribbean, where the calm sea

meets Atlantic Ocean.
These fruit are not produce, but dreams
harvested by tobacco-stained fingers, cutting

and shouting, pushes a coconut
into my pale palms. He’s bored
a hole through woody husk

for a stripy straw, shakes his head
at a handful of Tobago cents.
As we drive, I suck in the whole island,

want to spit the bits I do not like,
but it’s hard to separate the savagery
of history, with the here and now,

when all I can hear are the birds
flocking to the plantation dawn and dusk
of their own free will.

And on the beaches, tiny turtles hatch
plans, retrace old routes,
guided only by a star.

I wrote this poem after visiting an old sugarcane plantation on the Caribbean island of Tobago. Although now abandoned, wild birds are fed there twice daily, and flock to the plantation as a tourist attraction. The island, with it’s history of both British and French rule, and strong links to the African slave trade, has rich, varied cultural influences, which for me, brought up questions of home, identity and migration.

Sadly, I didn’t see any turtles hatch on the island when I was there, though each year they travel thousands of miles to lay their eggs along the beaches. Legend has it they circumnavigate the globe guided only by a ‘Turtle star’.

Beside the arched entrance to Swanage pier,
the sign for the sewage works. This is the end
of journey. Everything ends up in the sea.
Day is smudging into watercolour,
the circular sweep of bay gilded with sand.
For 90p you can walk echoing planks, pay
the ferryman in his dark canoe,
to cross the water to Poole harbour
on the other side.

Underfoot hundreds of tiny dull brass plaques
mark the dead, every step
is sadness and loss. A small bunch of flowers
a heart tossed over ornate Victorian iron.
We stare into afterlife—the day’s opacity
deepening to black.

Hidden up a side street,
the Maritime Curios shop,
with the sign on the door saying I may be open
or I may not. You will have to chance it.
In the window a netted glass fishing float spins
on its hook, a life belt gapes, steam pressure gauges
measure nothing, and in the dim glow of dead whales
I see my mother’s father, sitting on a chair.
I want to go in, to buy something,
but the man has the look of the sea about him—
if I go in I may never come out
of the water.

A part of the journey of this book has been researching my family history. My mother was adopted back in 1937 and recently we’ve discovered her biological father was an Able Seaman, who joined the merchant navy aged 15 years, sailing all round the world. We can map various routes he took. His last voyage was in 1940. While returning from Iceland to Liverpool with a cargo of whale oil, the SS Coronda was torpedoed, killing all men on board.

This poem, although set in Swanage on the South Coast of England, is dedicated to him.

As you can see from the above poems, there are various themes of routes and journeys running through the pamphlet – either from physical travel and migration, to emotional journey and the ageing process.

Here is the blurb from the back cover:

‘Emergency Mints’ is a liminal pamphlet, existing in its own space between sea and land. Karen Jane Cannon offers glimpses of the worlds of sailors and the land-locked, cross-Channel swimmers and school-girl paddlers, deftly utilising all of our senses. (Jill Munro)

Copies available here or on Amazon: 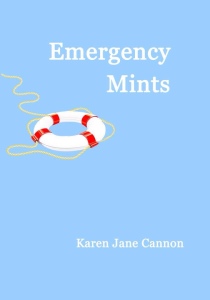 Enjoy the rest of Spring!

In early April I was excited to launch the first print publication by Silent Voices Press. You can find out more about the press here Here is the blurb from the book.

‘Transport yourself back to the 1950s and join intrepid tourist Edith Joyes on her post-war travels around Western Europe. Visit a Mulberry harbour, the Bayeux tapestry and the oldest clock in the world! See for yourself, through the eyes of an ordinary woman, what it was like to travel, the family Ford Popular packed to the gunnels, across Europe, shortly after World War II, on roads barely cleared of rubble. A fascinating array of travel journal extracts and postcards spanning 1951-1961, offering a vivid glimpse into our recent past, with an introduction by editor Karen Jane Cannon.’